​A brief history of bracelets When perusing our site for your newest Memi bracelets, you may wonder about the origins of bracelets and why and when they became so popular. Today, people all over the world wear their bracelets, in whichever style, with pride for their very own reasons. Knowing the context behind your purchases goes a long way in ensuring that your final decision is an informed one, which is why in this brief article, you will learn about the history of bracelets and how they relate to the stylish Memi pieces you may buy today. 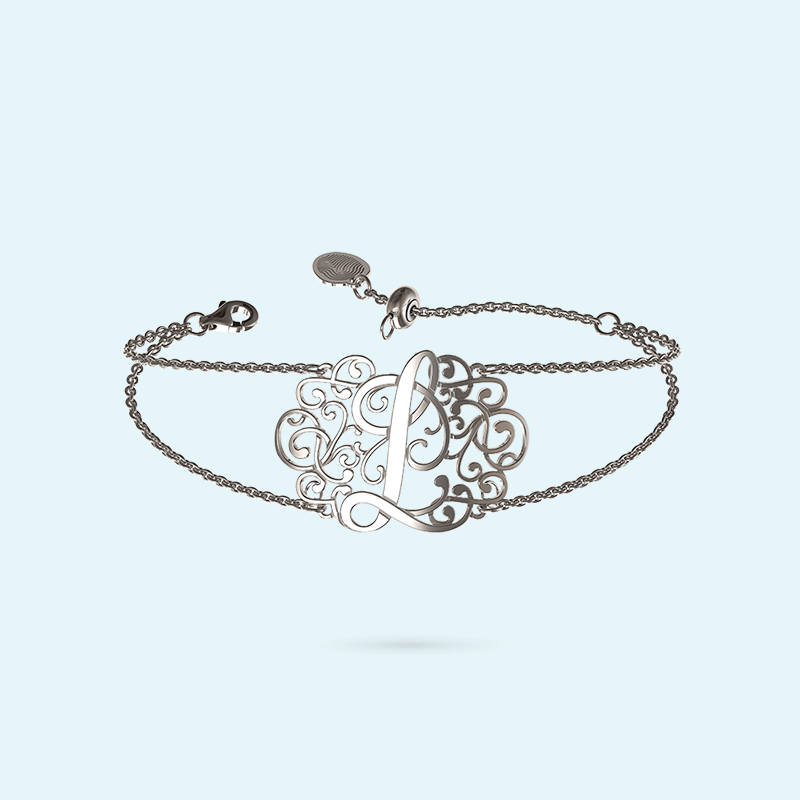 It is said that around 7,000 years ago, the wearing of jewellery like bracelet pieces became common in the name of ritual and adornment. Archaeologists, in their studies, have found strong evidence that people donned bracelets proudly in ancient Mesopotamia, Egypt and China. These bracelets were not so similar to the ones you may find for sale from Memi, however. They were made of shells, grasses, thin tree limbs and shells.


A bit later on, the typical bracelet was made from copper and bronze, and after the Bronze Age (which spanned from 2000 B.C to 1400 B.C) artisans created bracelets of silver and gold. These bracelets were arguably more decorative, bedecked with stones and shells. It was at this time that jewellery became a strong symbol of status, power and wealth.

When the First Dynasty rolled around in Ancient Egypt, Egyptians were adorned with bracelet pieces of silver and gold, decorated with semi-precious stones. In the New Kingdom, a host of experienced and talented goldsmiths meticulously crafted inlaid designs of African gemstones into bracelets. Although archaeologists found many bracelets in the tombs of the dead over the last 100 years, historians believe that these bracelets served aesthetic purposes rather than ritualistic ones. 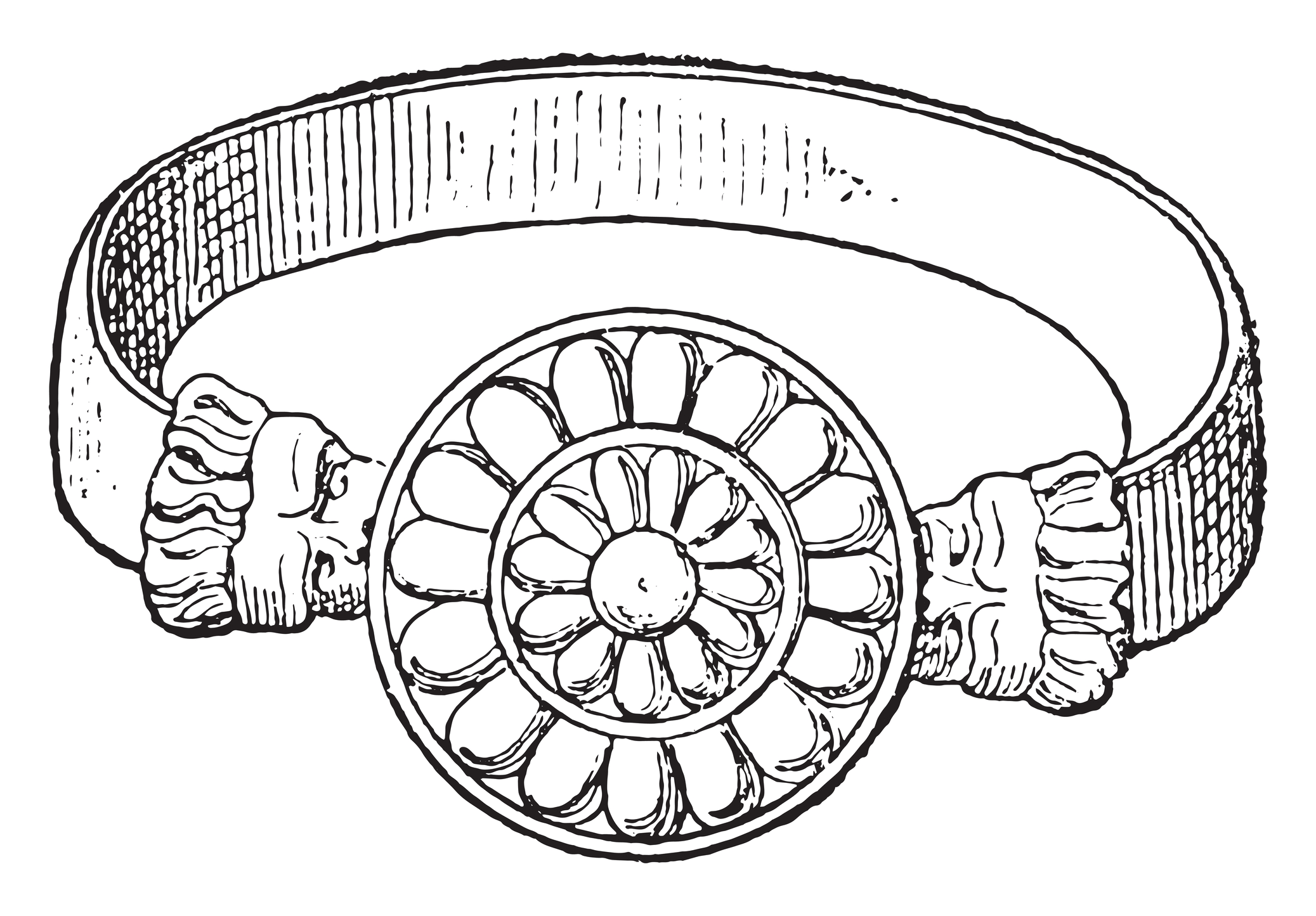 Bracelets of the Mediterranean

In most films and art pieces representing Greek life, we are able to see that the ancient Greeks wore cuffs on their lower and upper arms as a means of decoration. Soldiers too wore metal and leather cuffs on their arms for protection that strongly resemble what we consider to be a form of bracelet today. Historians have agreed that this practice was adopted later by the Romans, who adored coiled gold bangles often in the form of snakes. During this time, men and women alike enjoyed the benefits of bracelets as jewellery as Mediterranean jewellery spread across Europe.


However, as Europe transitioned into the Middle Ages, the practice of men wearing bracelets faded significantly. 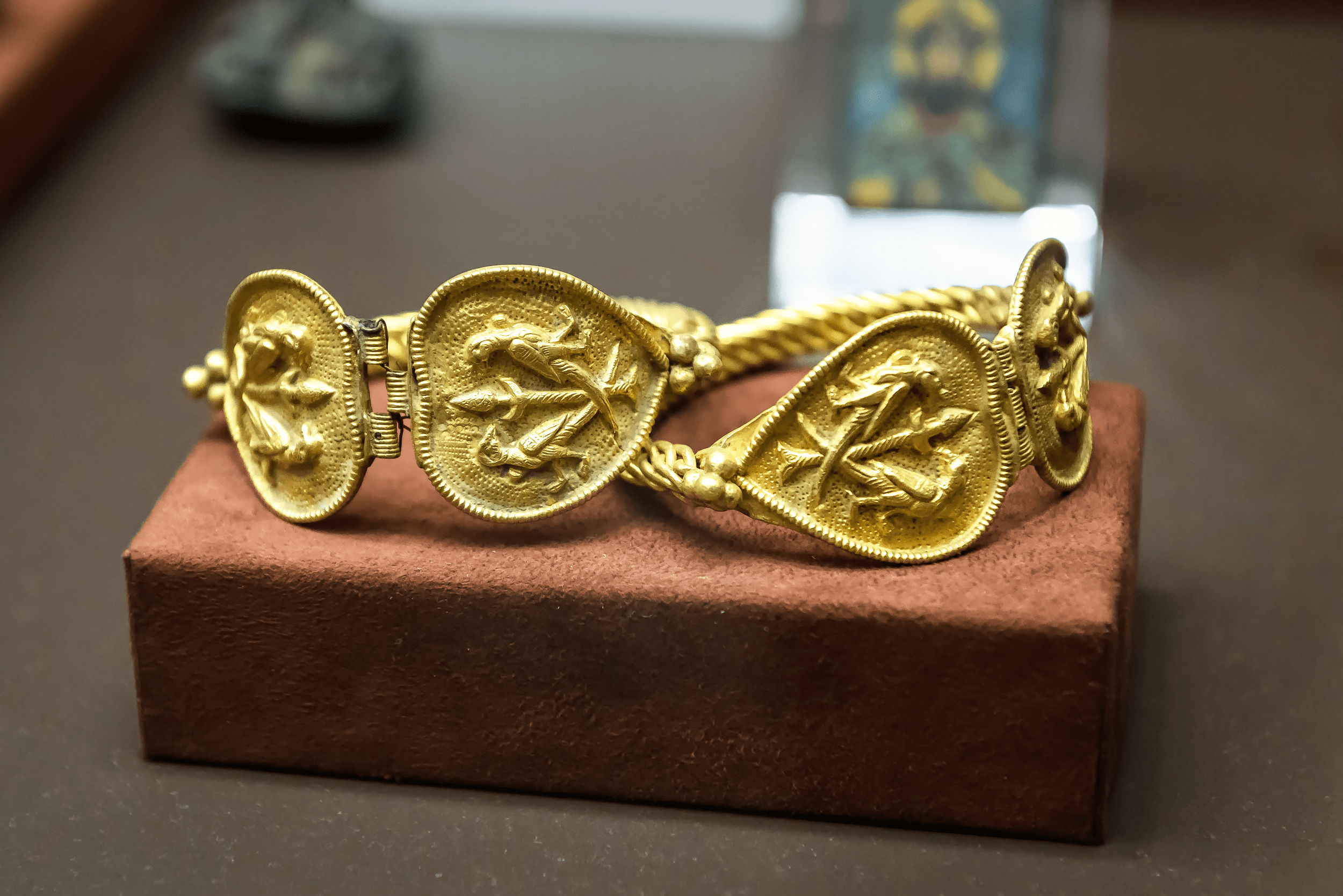 Carved expertly from jade, intricate bangles and cuffs have been found to exist in China from as early as 2000 B.C. The ancient Chinese population is said to have placed large value in gold bracelets, into which detailed patterns of animals, mythical creatures and nature were etched. In India, gold bracelets were also common during this time. These days, however, strands of metal and glass beads in vibrant colours have become more popular in the region. 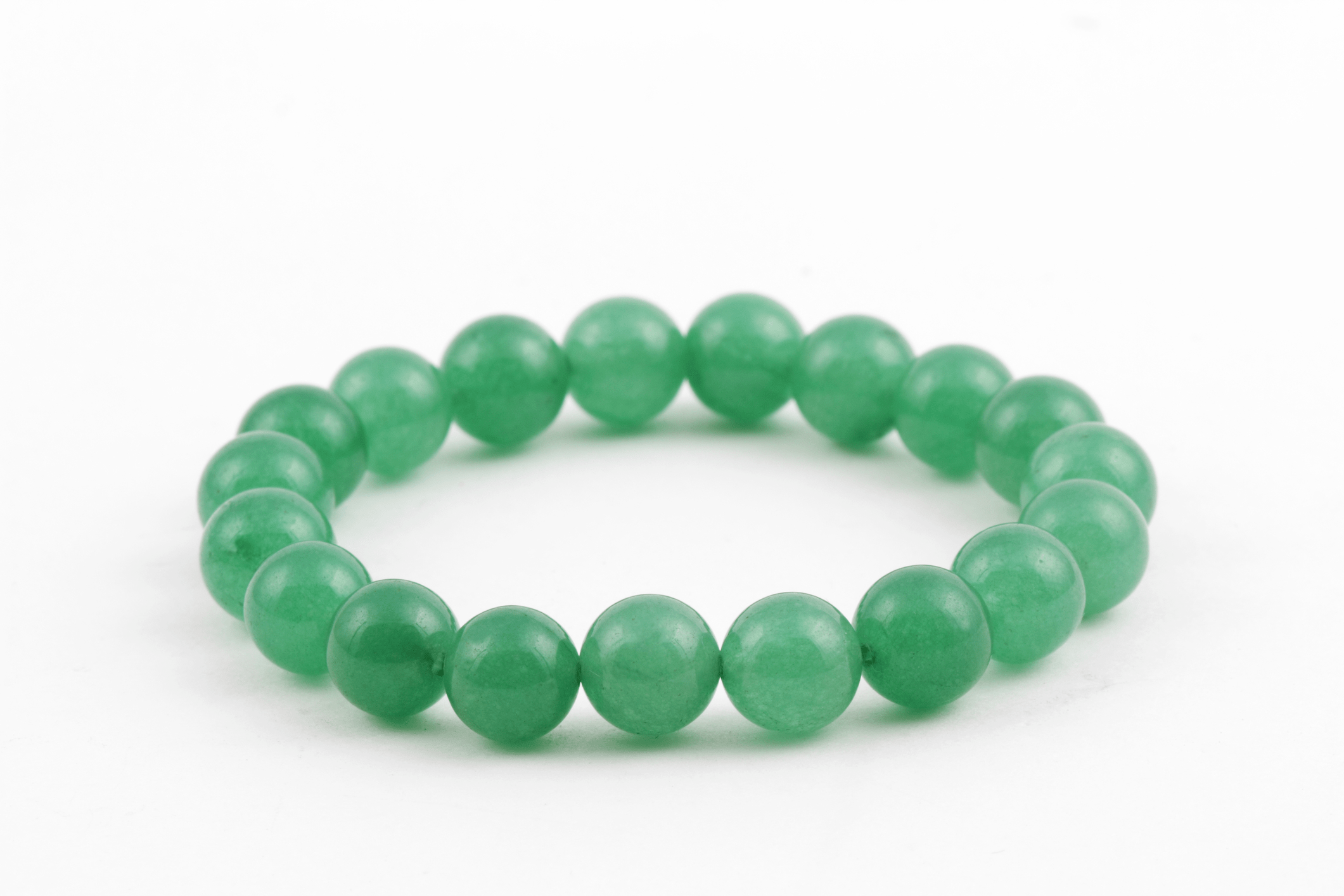 Around the 17th century, European women took it upon themselves to revive bracelets and add them into the ranks of common fashion accessories of the time. They commonly wore them in the form of several thin bangles and ribbons at the same time along their arms. In the 19th century, bracelet chains became widely popular, and the designs usually served to link medallions and cameos embellished with corals and ivory. During the Victorian Era, charm bracelets made a fun splash, making engraved charms and dangling lockets the latest craze.

The 20th century marked the beginning of bracelet designs hardly before imaginable for consumers. This, coupled with the fact that bracelets were being created through mass production meant that more people than ever before were enjoying their benefits and hopping on the trend. When the roaring 20s rolled in, the ornate designs of bracelets of the past century took a step back and were replaced with the clean lines attributed to the Art Deco period. Designers cleverly catered to teenagers in the 30s by adding Bakelite and plastics to bracelets – creating plastic bangles which became a well-received craze.


During the 50s, gold-plated brass or sterling silver bracelets were widely purchased and worn. Yet by the 70s and up until the turn of the century, bracelet wearers desired variety in their fashion choices. Thin chains, slender bangles, wide cuffs and beaded strands became the newest statement of style and prowess. At this time, men too began to enjoy bracelets once again, usually opting for sterling silver or gold link chains.

Much has happened in the last decade when it comes to bracelet design. Primarily, silver became the most frequently-used material when creating bangles, cuffs and link pieces, a trend which was set in motion back in the 20th when manufacturers began mass-producing silver jewellery. This made sense, as it was less expensive than gold yet still achieved that sparkle factor characteristic of precious metal that consumers longed for. This created a preference of silver over yellow metals.


Today, we see a plethora of styles and materials, advertised and made trendy through the fast-paced internet we enjoy at all hours of the day. We have seen the popularity of bracelet pieces with causes attached to them, such as those created by Memi in support of cancer. As the global green movement grows in numbers and speed, consumers are looking to their chosen bracelet outlets to ensure that their production processes are eco-friendly and humane, making them turn away from costume jewellery stores in favour of higher quality and more durable bracelet pieces such as those sold by Memi, that are not mass-produced with little thought behind them.


It often seems as if there are new bracelet styles emerging every day, and it is easy to become overwhelmed and confused as to which style bests suits you as the buyer and wearer. In order to familiarise you with some of the most common bracelet styles, we have compiled a brief guide to help you make a more informed decision:

Perhaps one of the most common and recognisable style of bracelet, the bangle is easily spotted by its rigid form. Bangles do not traditionally have clasps or fasteners to close them around your wrist, and are usually threaded over the hand when placed on the arm. It is important to ensure that you are familiar with bracelet style guides before you purchase a bangle online, so that it is neither too tight or too loose fitting – seeing as it cannot be adjusted in any way.

This bracelet is similar to the bangle in the way that it is also rigid. However, that aspect is the only similarity the two share. Where a bangle is a closed circle, the cuff bracelet has a gap that stays open, and is usually worn with the gap on the underside of the wrist for the best aesthetic effect. The cuff bracelet is more modifiable and the sizing is less important.

This bracelet comprises uniform, wide and thick links, and is easy to spot out on someone’s arm due to its bold characteristics. Think of it as a thick chain (albeit a pretty one) around the wrist. This bracelet’s name was inspired by a boxing champion by the name of Jem Belcher, who between 1800 to 1805, triumphed over all of England.

Perhaps the most popular style of bracelet to date, the charm bracelet is a chain that has the capacity to carry charms that hold personal significance for the buyer and wearer. In older times, charms served the purpose of passing luck onto the wearer, yet in recent times, charms usually signify the marking of a special occasion, event or milestone in life. Memi offers customisable charm bracelets, granting you the opportunity to build your very own bracelet with its own special meaning to you and your loved ones. With a host of charms and materials available from which to choose, you are afforded the freedom to craft your own bracelet in all the ways that count. 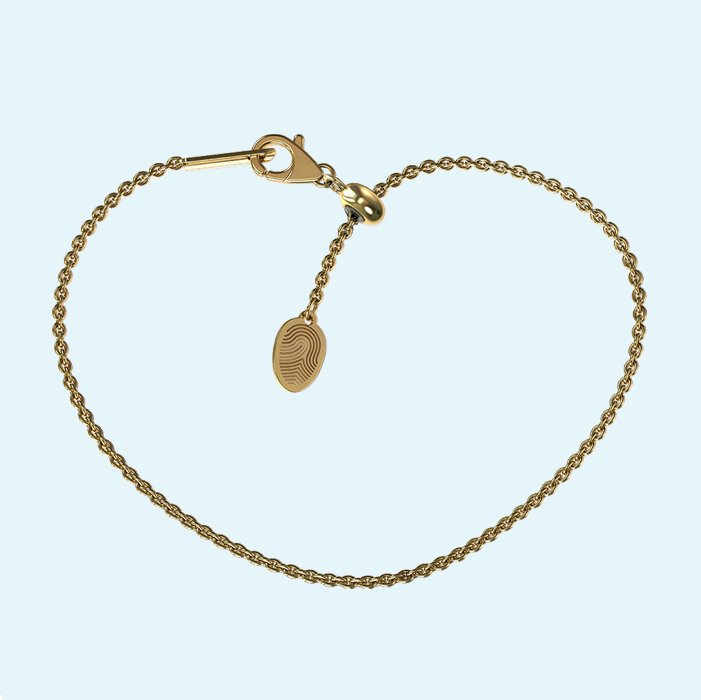 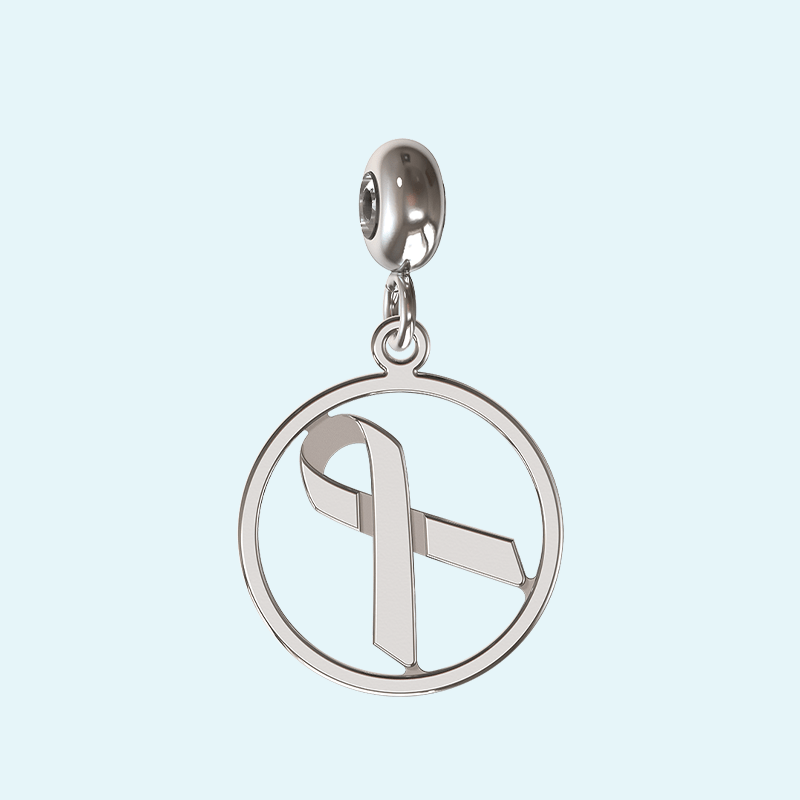 As suggested in its name, this bracelet consists of a chain formed by several interlocked panels which closely resemble the fences and gates characteristic of the English countryside. Because it appears quite ‘heavy’ in design and style, this type of bracelet is best worn as a main piece of jewellery on the wearer accompanied with a more formal outfit.

This bracelet comprises several, delicate strands that have been crafted and weaved together to create the illusion of a rope around the wrist of the wearer. This style of bracelet is particularly popular with men due to its classic simplicity and effortless style.

Another favourite bracelet, the tennis bracelet usually takes the form of a flexible and light band that is crafted from platinum or gold. This bracelet is frequently bedecked and ornamented with gemstones and diamonds and is a favourite amongst young women.


Famous bracelets from history and stories

When browsing jewellery stores such as Memi, you may make the connection between a certain bracelet and a specific idea you have heard about throughout your life in stories and myths. Stories and myths have been used for thousands of years to teach lessons, describe customs, institutions and religious rites as well as explain phenomena of nature. Much of what we learn as children has to do with stories we were told by our guardians and elders, and no history of bracelets would be complete with some of the most common bracelet stories included for your background knowledge:


• The tale of Odin’s arm ring

The chief god in Norse Mythology, Odin, is a symbol for wisdom, war, magic and poetry. His special arm ring, or bracelet, with which he was always associated, was referred to as Draupnir. The arm ring was a source of everlasting wealth and granted the wearer the power to produce eight more bracelets of equal power every nine days. Odin’s precious bracelet, Draupnir, was forged by two dwarves at the behest of the trickster-god, Loki.

The Golden Globe-winning and Academy Award-nominated actress of the silent film era, Gloria Swanson became one of the world’s most photographed celebrities during her time. She was known to be extremely fond of bracelet pieces, which featured in her photographs and movies. In particular, two astonishing bracelet pieces from Cartier in the 1930s at the height of the Art Deco movement. The chunky bracelets were created from several dozen semicircles of rock crystal which were augmented by diamonds and mounted on a platinum, elastic frame. The actress, and her bracelet pieces, was projected around the globe on the covers of magazines and newspapers for the world to see – making the two pieces memorable even today.

Mined from the ancient Golconda mines in India, the Darya-ye Noor is a massive, 182-carat pink diamond – considered to be one of the oldest diamonds known to the world. It is also called the “sea of light,” and was owned by several successions of Mughal emperors throughout the 16th and 17th centuries. Some have speculated that the Darya-ye Noor was once part of a larger diamond from the throne of the emperor Shah Jahan, who is famous for building the Taj Mahal. Although the Darya-ye Noor was once made into an elaborate bracelet in the form of an armband, it has since been made into a broach.


Today, the diamond resides in the Central Bank of Iran in Tehran, and forms part of the Iranian Crown Jewels. 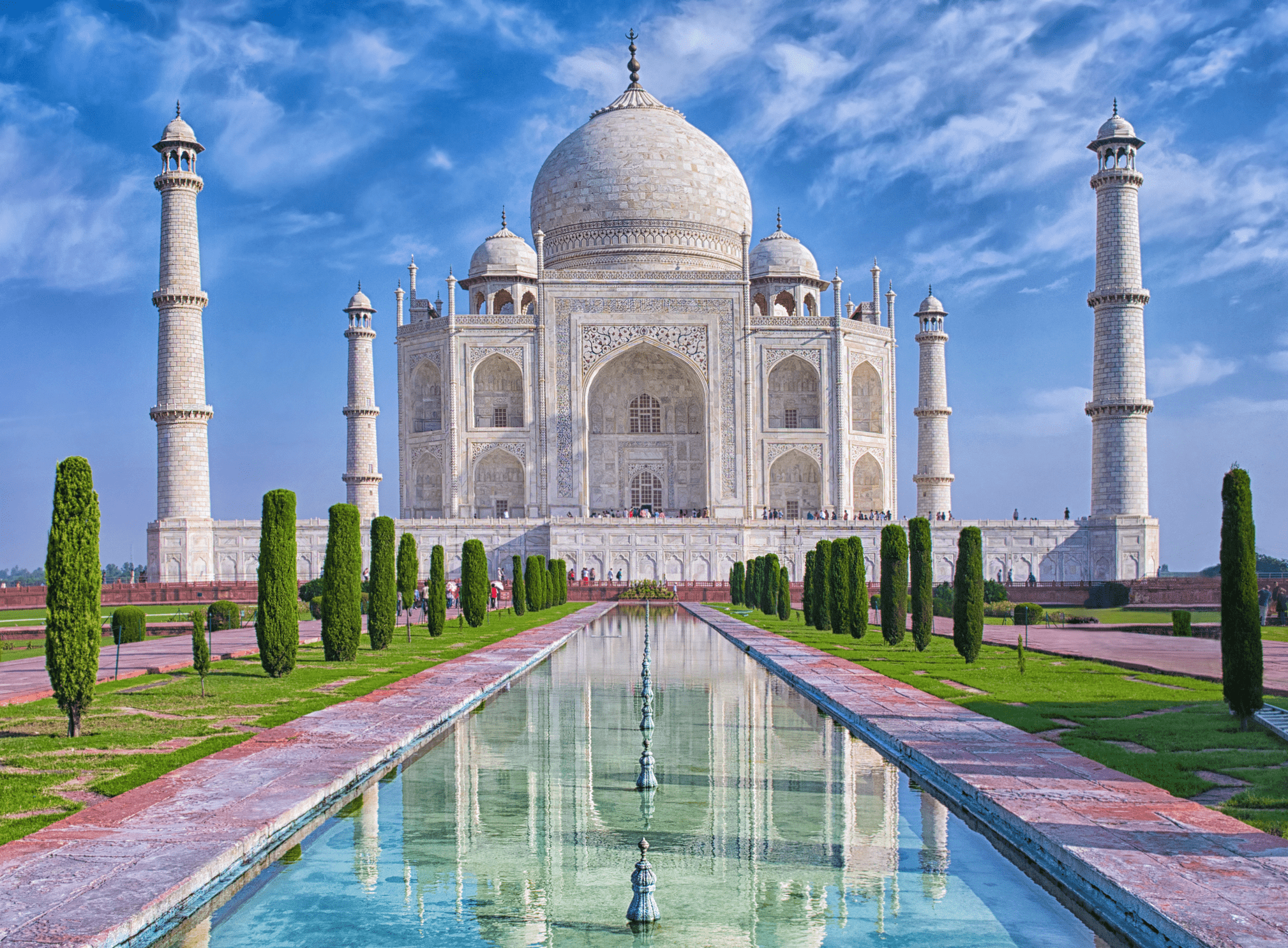